A Sex and the City Tour in New York

A visit to a sex shop, power shopping on Bleecker Street, sipping on a cosmopolitan at a trendy East Village bar. It almost sounds like I am spending the day as an extra on the set of the upcoming second Sex and the City movie. The truth is not far off. In fact I am on a Sex and the City bus tour in New York. We are cruising around the city spotting locations from the TV series and the movie starring Sarah Jessica Parker as designer clad columnist Carrie Bradshaw who is trying to find her Mr Right.


The tour is operated by a company called On Location Tours which was founded by Georgette Blau back in 1999. ‘Georgette started with a credit card and an idea’, as Lou, our tour guide puts it. They also run a Sopranos and a Gossip Girl tour.

But I picked the Sex and the City bus tour. As we drive by the first location which is the Plaza Hotel, I can’t help but wonder if hopping on a tour like this was a big mistake and that it’s going to be like a cheesy hen party on wheels. But all the ladies on the bus, which is pretty much everyone on the bus, are brimming with excitement. One young woman from the UK looks at her boyfriend, whom she obviously dragged on this tour against his will and says:’ I’m so excited. I can’t wait to see Buddakan, the restaurant where Carrie had her rehearsal party the night before she was supposed to get married to Mr Big. The place where she had the last single girl kiss.’ (Boyfriend rolls his eyes.)


Lou shows us numerous locations, such as the New York Library, where Carrie almost got married to Big, expensive designer shops that feature on the show, trendy bars, hip restaurants etc, etc. In between locations Lou throws out random SATC trivia and tests everybody’s SATC knowledge by asking questions to which the whole bus eagerly belts out the correct answers. These diehard fans really know their stuff. Before we get to a specific location, Lou shows us the accompanying scene on overhead monitors. But she doesn’t need to. Some of the girls on board the bus could probably talk along with the characters’ lines. 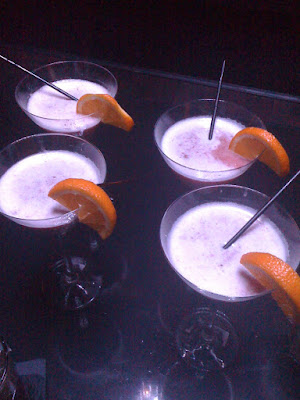 
Or take the Magnolia Bakery on Bleecker Street in Greenwich Village where we are treated to a frosted cupcake. The bakery featured in an episode where Carrie and her friend Miranda sit outside the shop on a bench eating a cupcake while talking about Carrie’s new love interest Aidan. Ever since that episode aired, the cupcake bakery has a queue of eager customers that goes around the corner. Oh and don’t forget the Cosmopolitan? Who had heard of this drink before the show ever existed? Now anyone and everyone is drinking it.


The same goes for the girls on this bus tour. They shop for vibrators, devour cupcakes and sip on a few cosmopolitans in the pub that staged as the bar that Aidan owned. And even though the girls on the bus tote fake Fendis and wear Gap instead of Gucci, they savour the experience of seeing these locations for real which is making them feel like Carrie and her friends for one afternoon.

It’s a very agreeable and different way to go sightseeing and it beats the generic open top city tours you see everywhere around the world these days.  This tour shows you many great shops, bars, cafes and restaurants you normally wouldn’t be able to find when you’re a tourist in New York.However, it might not be for everyone and one of the men on my bus actually said he would rather have sex in the bed than be on a Sex and the City bus tour. All in all, it’s a fun way to explore New York City. And if you’ve got one of those unwilling men on your hands, there is always the Sopranos tour.