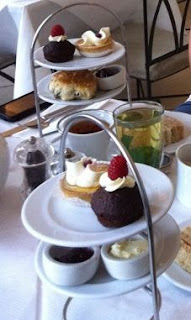 There’s nothing more prim and proper than a quintessentially English afternoon tea for two with dainty finger sandwiches and delectable scones. However the afternoon tea at Cellar Door I went to recently, was a tad racier than what you’d normally  expect.

I was invited to go to an afternoon-tea(se) at the Cellar Door, a cabaret and burlesque club in London. It’s located in a former underground loo on Alwdych, although there’s nothing down there that reminds visitors of its previous function. The place has been pimped up with lots of black leather, red velvet and loads of mirrors. It now looks more like a club you normally seen in gangster movies set in the 1930’s. The Cellar Door is a an intimate bar not only puts on cabaret and burlesque shows, there are also open mic nights. burlesque dance classes and even drag shows. There’s usually something on every night of the week. And on Saturdays they hold an afternoon tea session served with some cheeky burlesque. Which is what we attended.


The show started with a sizzling performance by Ivy Paige, a redhead who rendered Happy Birthday as breathy as Marilyn Monroe. Accompanied by Pete the painoman, she also sang a variety of highly erotic songs, flirted with most men in the room and embarrased the hell out of one guy named Dave who was there on a date with his girlfriend, by giving him a lapdance. It could’ve very well been his last date with her... After a short break the sensual Viscious Deliscous shimmied past our table while taking of her skimpy garments one by one till she was wearing nothing but some feather wings, a sparkly thong and a pair of nipple tassles.


The actual afternoon tea was titillating as well. Although I think it turned out to be an ‘afternoon bubbly/ cocktail session’ rather than an afternoon tea for two as the teapots left the table pretty much filled to the top. We had a choice of finger sandwiches, small cakes, chocolates and colourfully decorated cupcakes. You’d think that stuffing your face is naughty enough, but our verdict is that an afternoon-tea(se) at Cellar Door is an afternoon well spent and the perfect place to see some burlesque in London. Although you might want to leave your boyfriends at home.