For me food always plays a large part in making a trip a big success. Or a big flop, for that matter. I think it’s safe to say that my cooking course in Vietnam  in the Mekong Delta made my holiday. 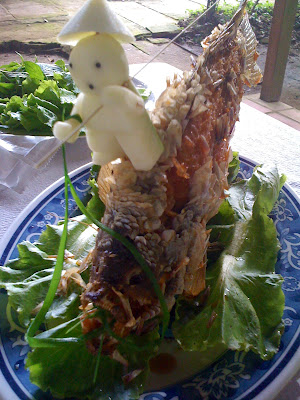 After an interesting  Mekong Delta cruise through a myriad of rivers and streams, we were taken to an island residence for lunch. A short walk led us through the herb and orchid garden, to a terrace where lunch was served. Vietnamese food already ranks high on my favourites list, but what we had that day was unlike anything I had ever seen. Yes, I’m using the word ‘seen’ on purpose here. Don’t get me wrong, the food tasted delicious, but it was the garnishing that made the food so remarkable. 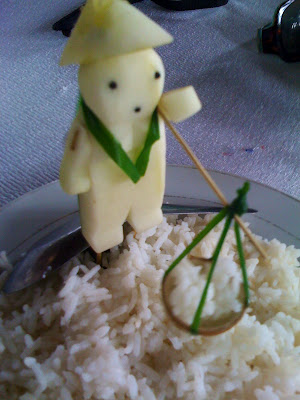 On top of the pile of spring rolls, there was a little man cut out of a cucumber rowing his cucumber boat. His two cucumber brothers also made an appearance on our main course; One was riding the fried fish, holding a whip and another was propped on our rice bowl, carrying two buckets of rice. Desert however was man-less, which was slightly disappointing. 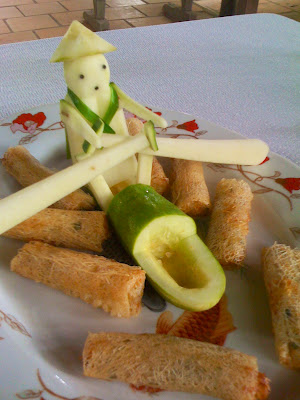 After lunch we went back to the boat and and continued our Mekong Delta cruise some more. Back on shore on An Binh island, we rode around the streets of the island, through small towns, across narrow bridges and along the banks of tranquil streams. Towards the end of the afternoon we were taken to our homestay, where, after a short siesta, we were summoned to the kitchen by the lady of the house for our Vietnamese cooking class. She was waiting for us with all kinds of ingredients, bowls and kitchen tools. Without many words, she showed us how to fill, roll and fry Vietnamese spring-rolls after which we had a go at making them ourselves. Of course they all came out a bit more wobbly than hers and certainly not as professionally decorated as the ones we had had for lunch earlier that day. But they tasted very very good anyways. As did the rest of the incredibly huge spread that night. Like I said, triple thumbs up for my trip to Vietnam.

NB: We booked this tour through the Vietnam Tourist Office in Vinh Long.