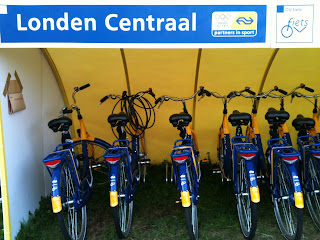 The Olympics and Paralympics are well and truly over now and the city has gone back to its normal pace. Even though I wasn’t looking forward to it much beforehand, the whole of London had a delightfully international and sporty atmosphere and I’m glad I was here to see it.

It was great to get a glimpse of the venues, seeing the games makers around town and watching the opening ceremony on a screen on the King’s Road. I even managed to get tickets for the GB women’s volleyball game which gave my Games spirit even a bigger boost.
However in my view, the cherry on the cake was visiting the Holland Heineken House which had turned Alexandra Palace completely orange for the duration of the Games. I’d heard much about it, but been to it and this time, living in an Olympic city, I just had to see what it was all about. And so I went.

Coming out of the tube at Wood Green, there was an orange line snaking its way to the busstop where the free shuttle bus, courtesy of the Nederlandse Spoorwegen (Dutch Railway) picked us up and ferried us to the palace. Dutch flags and hard core techno awaited us on board. At the palace itself we tucked into some friet met, kroketten and of course lots of Heineken beer, while watching our men’s hockey team lose from Germany. But the defeat was soon forgotten the minute Dutch crooner Guus Meeuwis appeared on stage and turned the entire hall into party central. Even former PM JP Balkenende sang along. ( Or so I heard.)

I didn’t take the chance to look around the other ‘houses’ that were set up around London, but I’ve been told that the Dutch one was the best one. I mean when Belgians claim that the Dutch Olympic house is better than their own, I think that in itself is proof enough.