Latvian Love Padlocks in the Snow 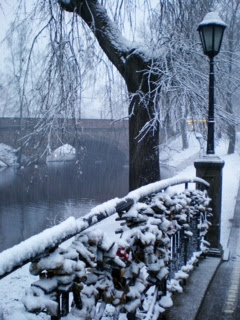 They seem to be popping up all over the world these days: love locks. For those of you who are not familiar with this phenomenon, they are padlocks locked around public structures by couples who want to symbolise their everlasting love. These structures can be bridges, fences, gates or pretty much anything a lock fits around.

It’s a bit fuzzy as to who started this tradition where and why. Romans say that the heroines in a book by Federico Moccia started the trend and in Serbia locks started appearing on a certain bridge after a local school teacher was jilted by her lover and died of a broken heart. The bridge was the place the two used to meet at.
Fact is that they’re popping up everywhere around the world, much to the dismay of many local authorities and other admirers of structures old and new. 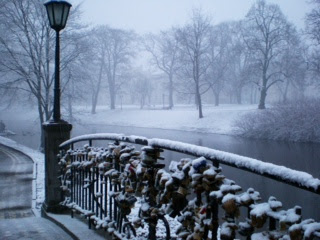 The first time I saw these love locks was on a holiday to Latvia. Me and my travel buddy were in Bastion Hill Park in Riga when we happened on this bridge in the middle of the park. Apparently it’s a tradition in Latvia for newlyweds to lock a padlock on a bridge and this particular one holds many. The snow, which was still falling from the sky, gave the scene an even more romantic touch.

I do wonder whether the couples who locked their padlock around this bridge are still living happily ever after, but it made for a nice visual souvenir of my holiday.