When visiting Massada, the first thing that one might think is: What was King Herod the Great thinking when he built his palace on top of a massive mountain in the middle of the desert in Israel. But if he wanted to be left alone, then he probably picked the right place. It is located in one of the most inhospitable, yet beautiful places I've ever been to. We visited Massada when I was on a trip to Jerusalem with my travel buddy. We'd hired a driver who drove us there along a windy road leading through the arid landscape and along the dry banks of the Dead Sea. The land outside our car windows was sandy and barren, dotted with the odd shrub and deserted village.

When we reached the visitor centre of Massada, we felt as if we'd just happened upon an oasis. It's a brand new looking, modern centre with American  aircon temperature levels. But believe me, they were much appreciated. 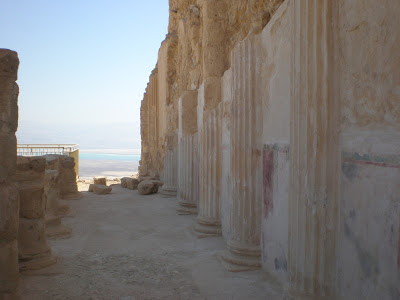 We bought tickets for the cable car as we didn't really fancy a hike up the mountain in 40 Celsius. We did see some people making an attempt, but I'm not sure if they ever made it up there alive. Coming out of the cable car, we started our self guided tour. There are loads of ruins to see, such as a byzantine Church, a bath and storage rooms, but the most impressive part of Massada in my eyes was the North Palace. 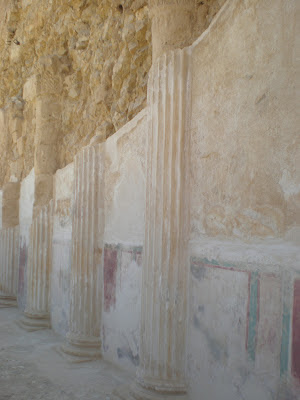 This palace sits on a pointy part, on a lower level of the plateau, which can be reached by a set of metal stairs. Standing in what was once a reception hall, feels like you're standing on the bow of a ship. Think Leo and Kate, but in a dessert. The views are phenomenal from here and I could almost imagine what it must have been like for Herod to be sitting on his throne looking out onto the dessert and the Dead Sea. Climbing back up the metal stairs, huffing and puffing in the stifling heat, did make me appreciate that there were no stairs or cable cars back in Herod's time. Imagine having to do that commute up and down the mountain every day. Suddenly a ride in a hot Northern Line carriage doesn't seem all that bad.

Before heading back to our hotel in Jerusalem we finished our visit with a refreshing dip in the Dead Sea. Although the refreshing bit was debatable as the temperature of the water was also in the upper 30s. However, all moaning aside, a visit to Massada was worth every minute, but if you can visit during winter then that will definitely be a plus.