Riding the Women Only Train in Kuala Lumpur


I'm lucky enough that I don't have to commute on London's underground or buses every day, but when I do I absolutely hate it. It's hot, crowded and smelly.


In many countries women can add groping, male hands to that. Including this one! That's why in some countries in Asia there are women only trains. When I was in Kuala Lumpur a while back, I had the pleasure of riding one.

Now I admit I wasn't riding it in fully fledged rush hour, but I have to say it was quite a pleasant experience. No uncomfortable stares, no 'accidental' rubbing and no lost hands. Well, maybe I did get some stares, because as a white Western female giant I stood out like a sore thumb among the tiny, veiled Kuala Lumpurian women. 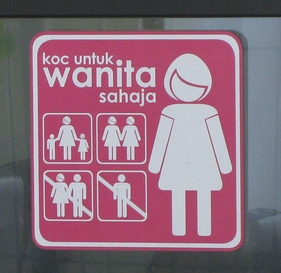 It did feel quite elite though. It was like me and my female co-train travellers were part of an exclusive women only club. With guards standing by the doors, fending off any confused male travellers trying to make their way into our private carriage. Like royalty I felt.

I'm not really one for gender segregation, but in this case I'm not entirely opposed to having women only train or tube carriages. It does make a girl feel a lot safer when travelling alone late at night. And a little bit like a princess...