Amsterdam is filled with quirky hotels, but when I go back home, I prefer to stay at the Lloyd Hotel.

The Lloyd Hotel in Amsterdam is housed in a gorgeous building along the IJ-quay which was built in the early 1900s by the Royal dutch Lloyd shipping company. It was intended as a hotel for Eastern European immigrants, stopping over on their way to South America. In 1935 the Lloyd company went bankrupt after which it was turned into a house of detention. Before Lloyd Hotel opened its doors in 2004, the former cells were used as artists' studios. 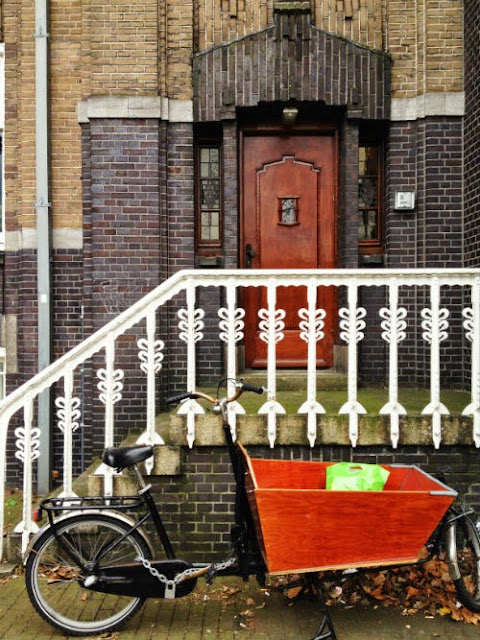 Nowadays, the hotel is not only a place for tourists to rest their heads, but it's also a cultural embassy lots of showcases, workshops, concerts take place. There's also a library with art books and there are installations, paintings and sculptures dotted around the hotel's public spaces, including a permanent exhibition of the building's history. 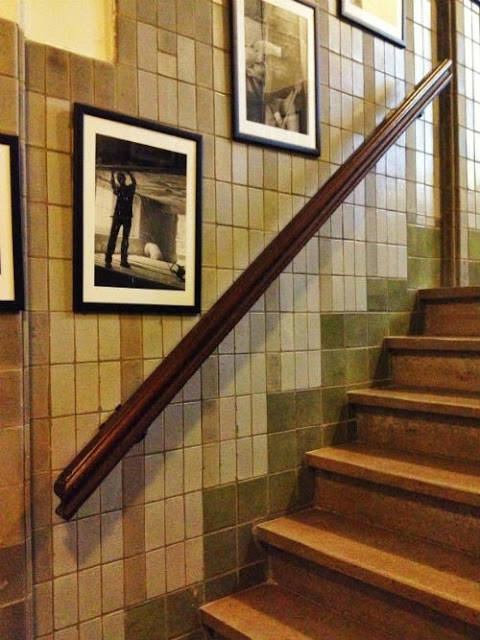 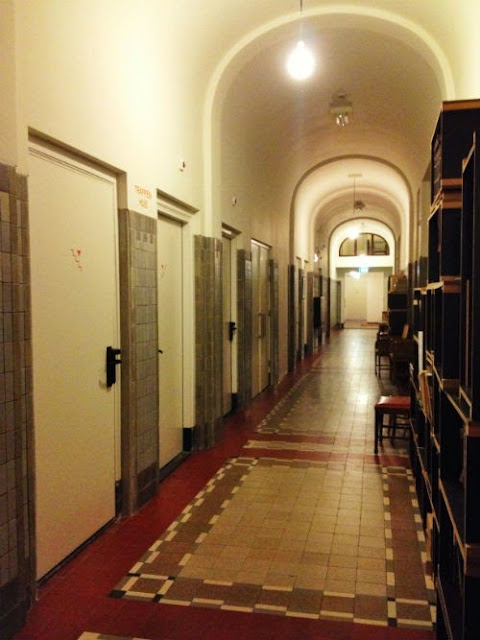 The rooms are divided in 5 categories, ranging from 1 to 5 star rooms. I had booked a 1 star with shared bathroom, but was upgraded to a 2 star which had a private bathroom. 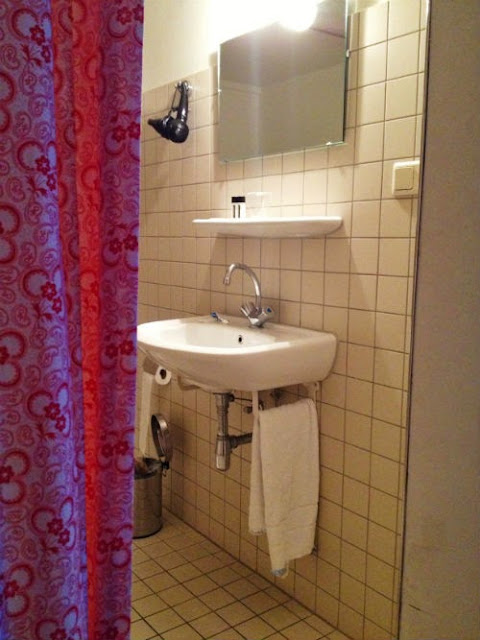 When I opened the door to my room, I thought for a minute I'd stepped into a communal shower area or a housekeeping room. It took me a while to realise it was my humongous bathroom. I could've thrown a party in there. It was a bit bare with white tiled walls and only a small shower in the corner and a tiny wooden stool in the other. A giant whirlpool would've spruced up the space a bit. 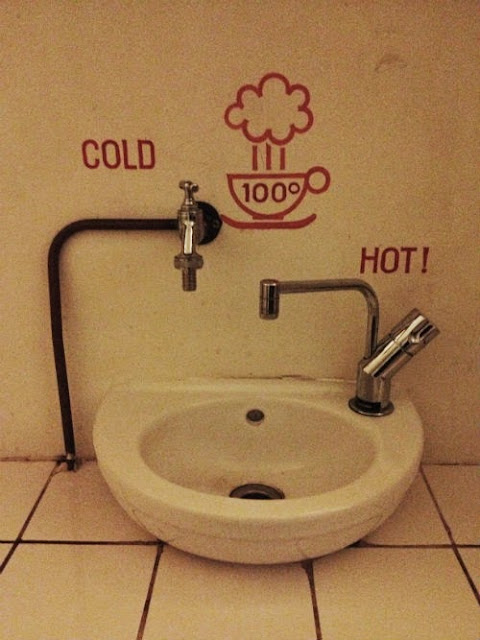 The actual room was hidden behind a flowery curtain.The decor was just as spartan here as it was in the shower room, furnished with only a metal table and chairs, two single beds and side tables. There were a couple of hangers perching on the wall and the lights were of the functional kind. 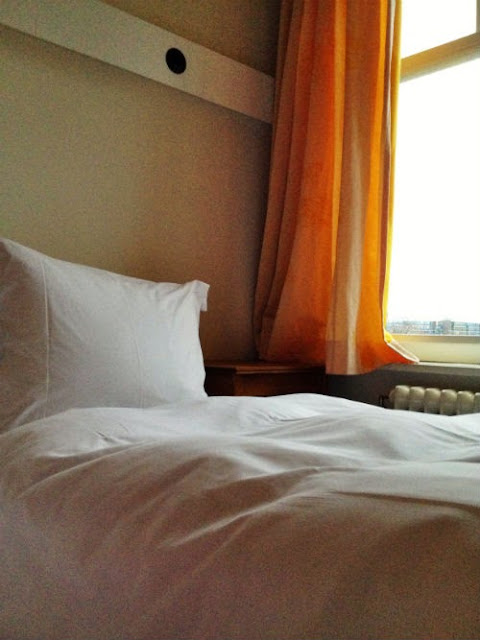 
In the morning, I went down for breakfast which is served in the restaurant.In an atmosphere that was slightly less detentional and more homey, they serve a breakfast buffet, but I opted for a aged Dutch cheese open-faced sandwich and a cappuccino. 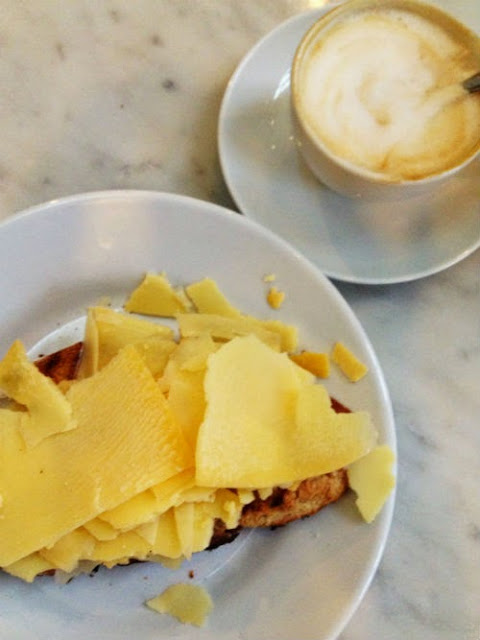 After checking out, I snooped around the place a bit more. I loved that there were still so many 20th century features around and remnants of its former function. There were antique cots hidden in a corner on one floor and lovely stained glass windows in the stairwells. Regardless of my slightly spartan room, the Lloyd Hotel in Amsterdam is a very interesting place to stay. 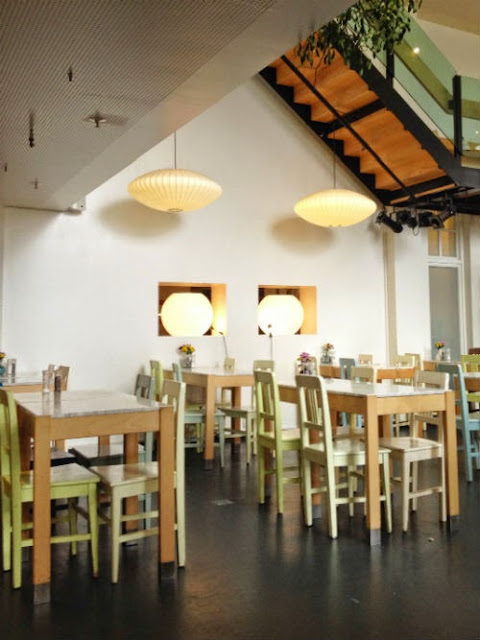