Last night I and about ten other bloggers were invited by Zomato to try out a new 'pop-up' at the Taj St James' Court hotel called Around the World in 80 Tastes, a journey through 4 of the hotel's restaurants. Basically I could've almost done my entire Eating Around the World Without Leaving London blog series here at the Taj St James' Court as the hotel counts a total of eight restaurants/bars on the premises, serving dishes from pretty much all over the world. But the 80 tastes pop-up takes place in four of them. 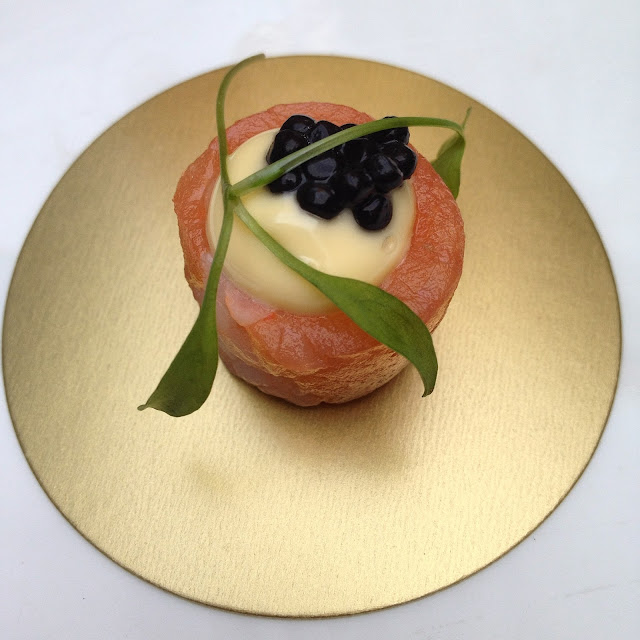 We started off with a Laurent-Perrier champagne flight in the Courtyard which is so hidden away and secluded you'd almost forget you were in London. It's great for summer drinks and al-fresco snacking as the Courtyard serves sandwiches, sharing platters and burgers. Our champagne was perfectly paired with pretty salmon and delicious scallop canapés. 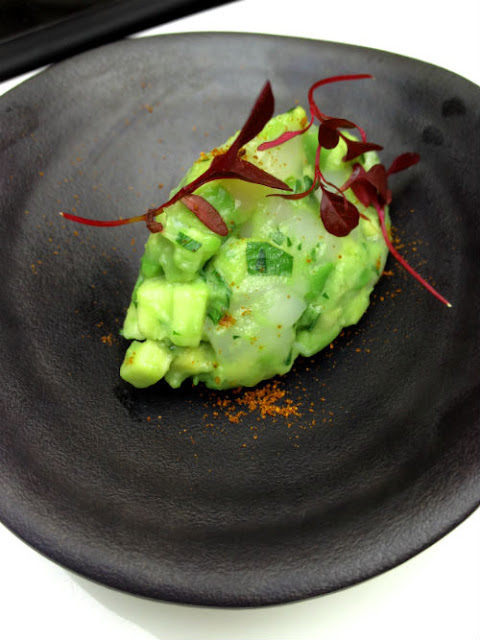 Next, we moved on to Bistro 51 where our appetiser was waiting for us; sesame crusted and lightly seared tuna steak slices with a tart pink grapefruit salad and wasabi potato cubes. 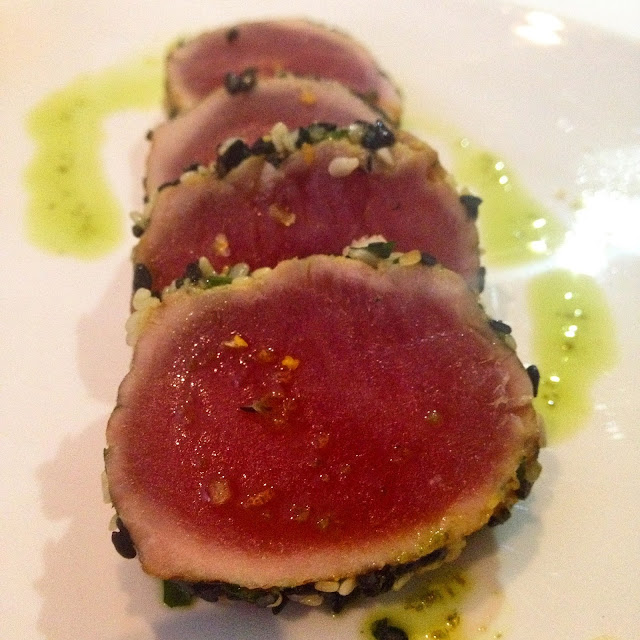 Our mains were served at Michelin starred Quilon restaurant which hosted us in a stylish private room in the basement. The chef came out and explained that Quilon serves Kerala influenced dishes which means seafood in various shapes and sizes. 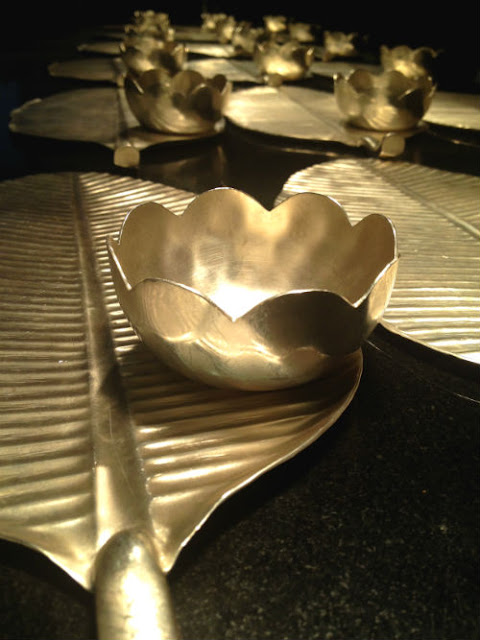 For us he had prepared taster portions of the Fisherman's catch, which consisted of succulent pepper shrimp, a crispy crab cake, lentil fish and a grilled to perfection scallop. Every single one of them tasted so fresh as if they had just come off that very fisherman's boat. We also had a small bowl of Quilon fish curry with a malabar parantha which looked very much like a mini naan bread. 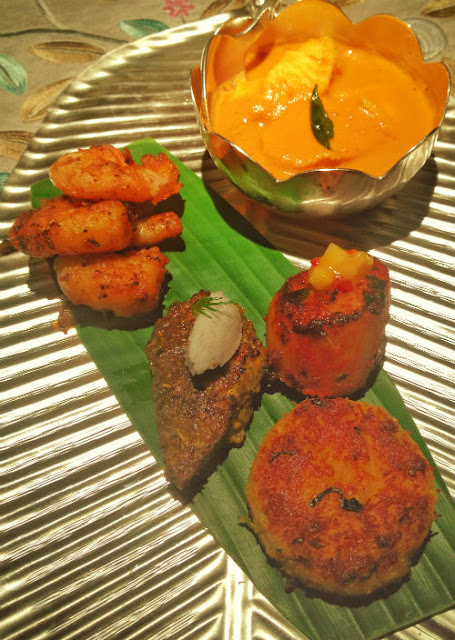 Our food tour around St James' Court continued at Kona Restaurant where we had a crusty Norfolk fried chicken with a panzanella salad, drizzled with a roast garlic reduction. 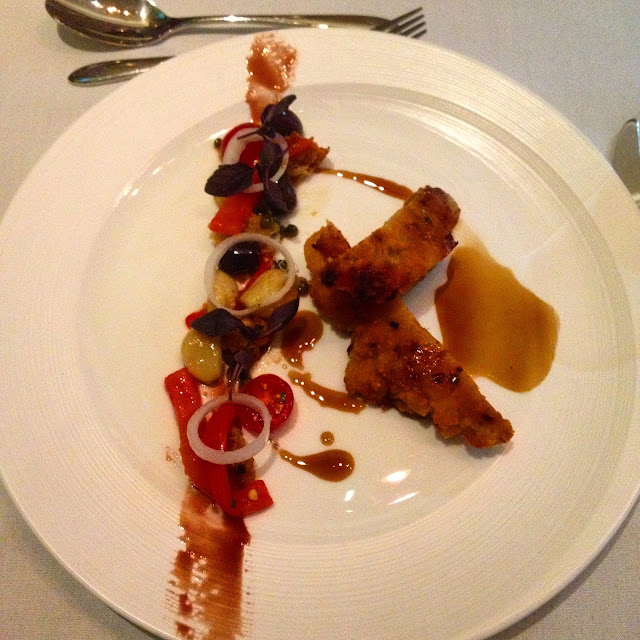 Full as we were, we managed to finish off our food and fun filled evening with a taster of three of Kona's uber chocolaty desserts. Talk about chocolate overdose. 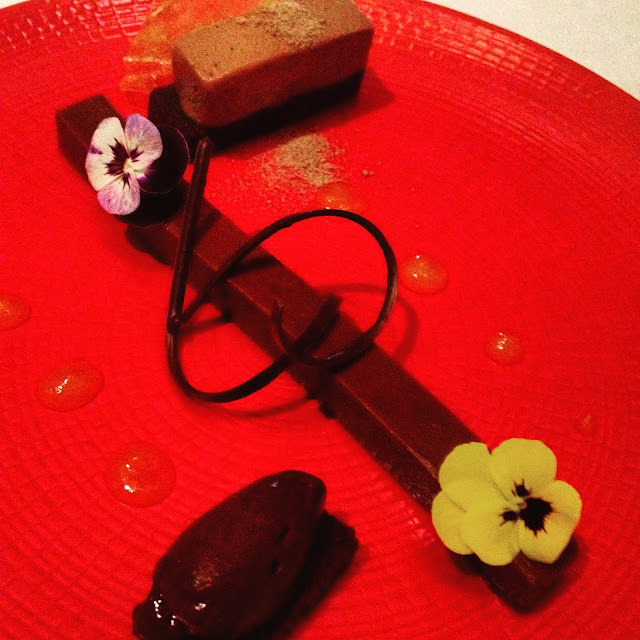 The 'Around the World in 80 Tastes' experience will be available at the Taj St James' Court very soon, so keep checking their website for more up to date info.
Email ThisBlogThis!Share to TwitterShare to FacebookShare to Pinterest