I do like a good spooky event, be it a Ripper Walk or a Victorian ghost story evening at a grave yard. So when my friend told me about The Real Mary King's Close experience, I put it on the list for my weekend break in Edinburgh.

The Real Mary King's Close experience takes you down into a labyrinth of underground alleys and tenements houses that were covered when the city decided to build the Royal Exchange on top of them. People that were living in these streets and houses were forced to move out, but their traces remain. 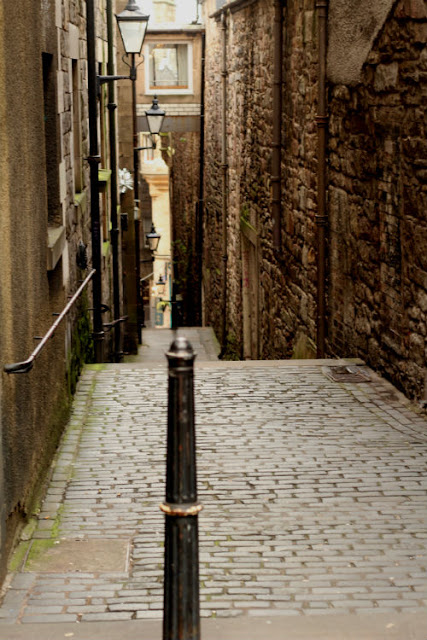 After a short introduction into the history of the area, our costumed guide who claimed her name was Agnes Chambers and had lived on Mary King's Close 400 years ago, took us underground. She painted a pretty vivid picture of what life was like back then, and believe me, it was pretty grim.
Families of up to 12 people lived in a single room tenement, with no sanitation whatsoever. The bucket in the corner of the room is used as a loo, and emptied twice a day out the front door. Imagine buildings of a couple of storeys high, all doing the same thing. If you had a big of money, you lived up on the higher storeys, which made it less of a filthy affair.


Diseases were rife and one of them was the Black Death, which caused havoc and took many victims in the year 1645.

Mary King's Close is but one of the alleys, which are called closes in Edinburgh, but this particular street has earned a bit of a reputation of being haunted. It is shrouded in myths of quarantined plague victims that were left to die, or even walled in. Apparently there were various murders that took place her. So apparitions and ghost sightings galore.

People have said they'd heard scratching coming from a chimney, seen a male figure walking up and down the close, and some have even heard the murmur of people as if they were in a pub. There is even a shrine for a little girl's ghost that supposedly conveyed to a medium that she felt lonely, which has led to people leaving all kinds of toys for her. It's nice to know though, that the people of the Real Mary King's Close donate these to charity.


In spite of all the spookiness, the tour was not all that hair raising and we didn't see one spirit. Unless you count the picture of me and my friend that was taken during the tour. Infrared photography doesn't do anyone justice. I thought it was just really cool how these closes have been preserved so well, giving us a great window into 17th century Edinburgh.