What could possibly be better than eating ethnic food? Making it yourself or course. So when I was in Morocco last week, my friend and I went on a cooking course in Essaouira. 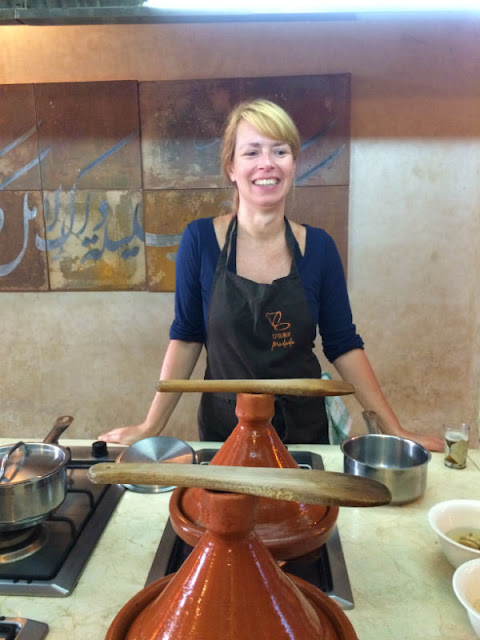 The place we went to was called La Table Madada. It's a fancy restaurant within the walls of the historic medina serving local food. We were staying down the road and happened to walk by one morning. We loved the look and feel of the place and decided to sign up for a cooking course. We were the first and the only ones for the next day, so the choice of what to cook was up to us.

We decided we were going to try our hands at an aubergine salad and a beef tagine with apricots and figs. Sounded easy enough so far. 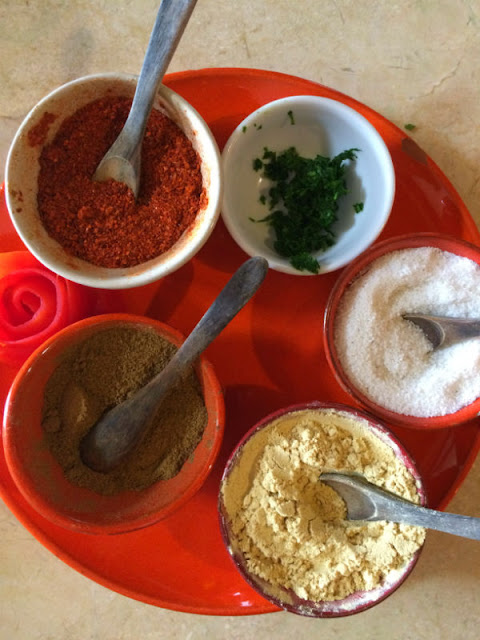 The day of our course, work stations were kitted out with aprons, tea towels, knives and a chopping board. On the chopping board, a bright purple aubergine, a tomato and an onion were waiting for us. There were lovely colourful saucers filled with fragrant spices lined up in a neat little row. 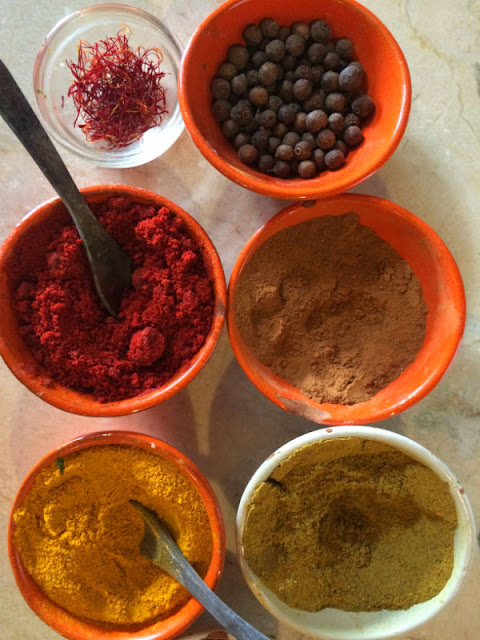 We were greeted by our translator who introduced us to our chef Mouma. She seemed nice. At first.

After we'd put on our aprons and tied the tea towel around our waistband, we were ready to get chopping. Mouma asked to take to onion and put it on the board. I was about to start chopping, when she told me abruptly to look first.

So we watched her chop the onion in tiny little pieces at a dizzyingly high speed. Then it was our turn. Of course my fingers just didn't seem to want to move as fast as Mouma's, but hey, it's the end result that counts. When I was done, I poured them into a pot, ready to tackle the next vegetable. But Mouma was having none of that. 'Too big', she said, while wagging her index finger. My onions were still too big. So out she poured them onto my board and showed me how to do it the right was. 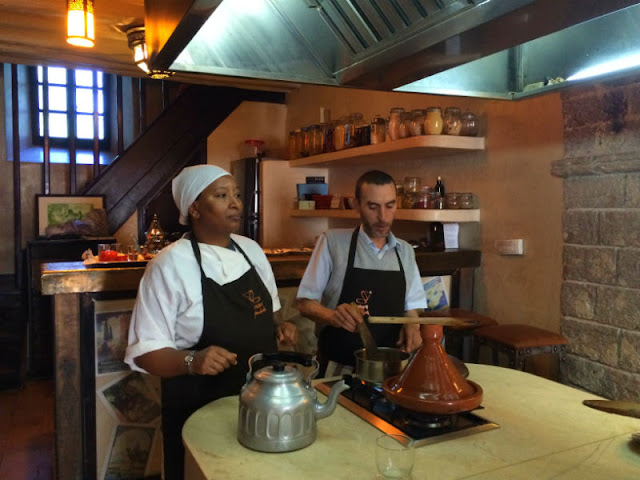 Reluctantly I kept chopping, under the watchful eye of Mouma, who was quickly turning into a female, Moroccan Gordon Ramsey.

She rejected my onion chopping results a few more time, before finally we moved on to the aubergine. This proved a bit easier, but the most difficult bit was yet to come. The tomato. It was meant to end up looking like a rose to pretty up our dishes somewhat. Not my strong point, making a tomato look like a rose, but I got some help from the translator, who was a mean veggie chopper. And a lot nicer than Mouna. 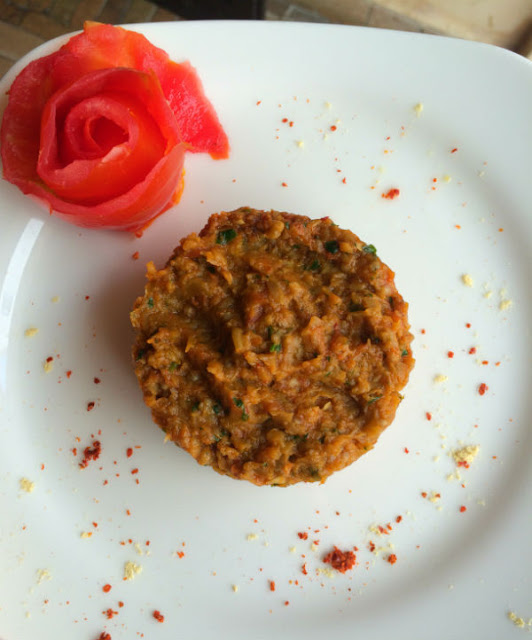 After the onions were added to the tagine, followed by bits of beef and herbs, things got a bit easier and Mouma a bit nicer. 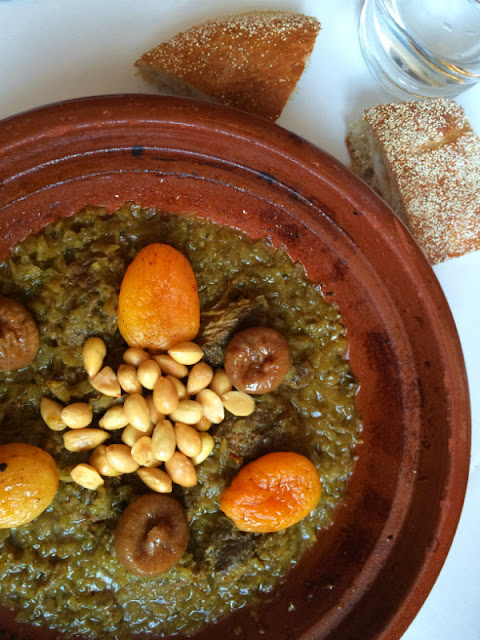 After about two and a half hours, we left the tagine to simmer and the aubergine salad to chill and our translator took us to the souk to learn about spices and herbs. He took us to Mohammed who had a small shop in the corner an empty square. I couldn't help but chuckle when I saw a sign that said: Mohammed, because you are worth it!' We smelled some spices and bought some spices before heading back to La Table de Madada. 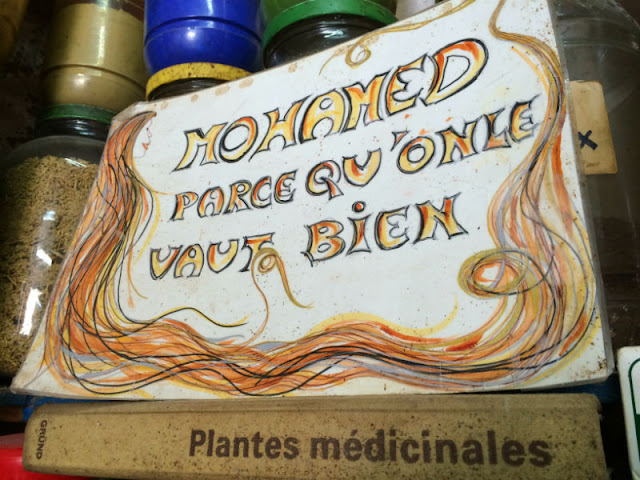 Our dishes were ready and so was our table. We sat down and Mouma and the translator served us our creations. And, if I may say so myself, they were pretty damn tasty. 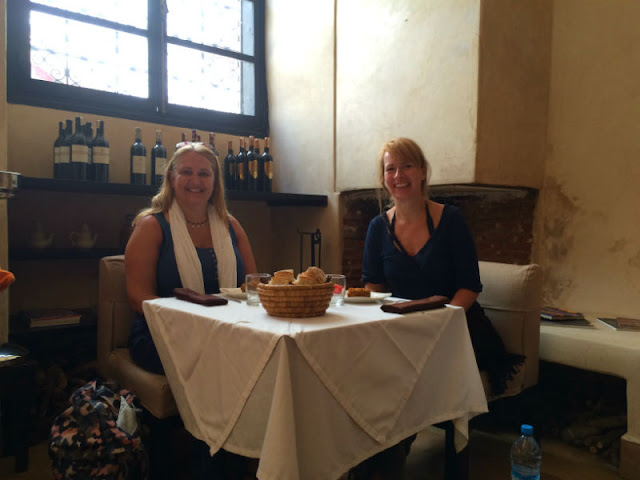