Seeing the gorillas in the wild had been a long time dream of mine and last week I finally made it happen. 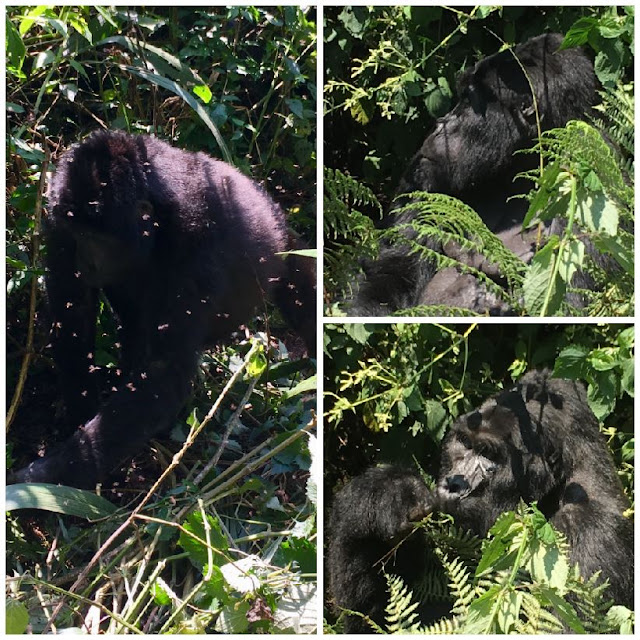 After a lot of trawling around the internet we had picked a local tour company called Wild Whispers Africa who offer tours to both Uganda and Rwanda. Uganda permits are half the price of those to Rwanda, which is something to bear in mind. We opted for Uganda as it seemed to offer more options in terms of things to see and do. We booked a 4 day Gorilla and Chimp Tracking Tour. We were treated to many more primate species so it was a real monkey trip. 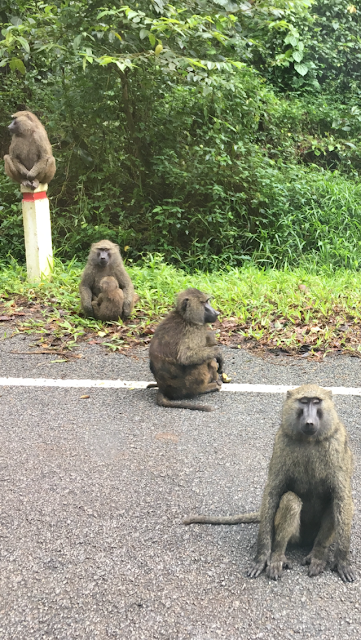 We had a private mini van at our disposal and the loveliest guide you can image called Jacob. The drive on the first day took us through the country side to Kibale where we were welcomed at the Primates Lodge. A place that was true to its name as monkeys were literally jumping around on the resort grounds. 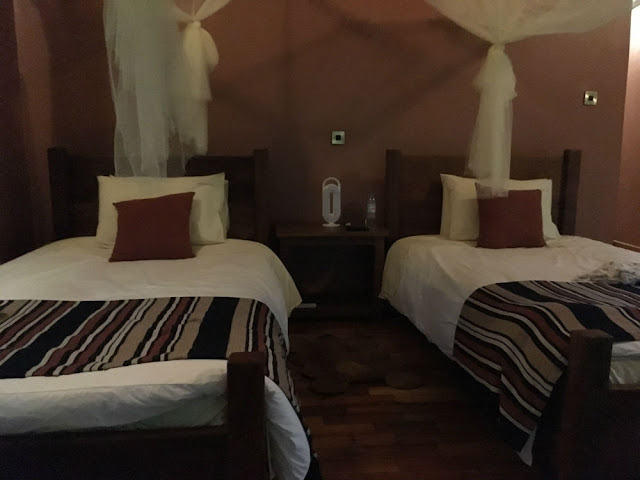 After lunch we were assigned a guide who took us into the woods on the search for chimps. We bumped into a group of lazy males who gave us a bored glance and continued with their afternoon siesta. Until the hottest girl chimp in the woods showed up and all hell broke loose. Apparently fighting, screeching and banging on tree trunks make boy chimps irresistible, and all the males in the group were trying to get her attention. A bit too close for comfort in my opinion especially after hearing that chimps have the power to tear off limbs and rip out eye balls. 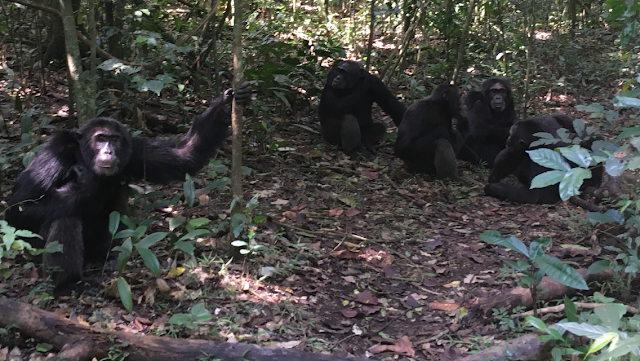 After a very comfortable night at our lodge, we headed through a variety of different landscapes to our next stop Bwindi. We drove along volcanic lakes, tea plantations, savanna where we spotted loads of animals like wart hogs, water bucks, more monkeys and Ugandan kobs. Supposedly there are tree climbing lions and wild elephants in the Queen Elizabeth NP as well, but they kept themselves scarce.

That night we stayed at Engagi Lodge where we had our sundowners on the terrace looking out into the impenetrable forest which stretched out right in front of us. 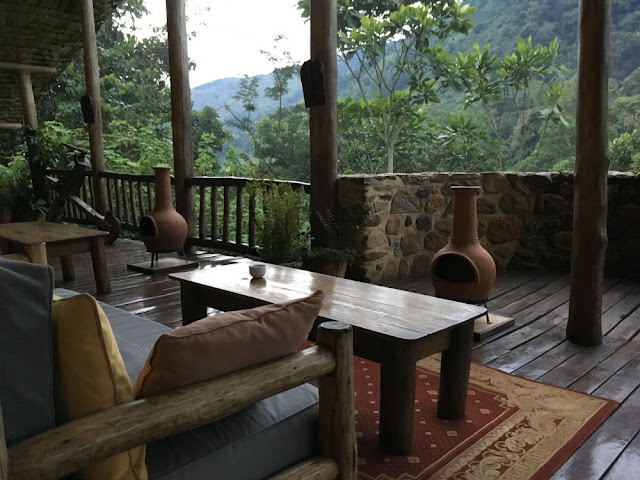 The next morning we were woken up early and after breakfast were driven to the visitor centre of Bwindi Impenetrable Forest. Here, we met our guide and porters as well as the other hikers. It was only a group of 7 as more people would only make the gorilla group uneasy. Two rangers had already gone ahead to track the gorillas to make it all a bit easier for us.

After the obligatory do’s and don’ts, we set out and started our climb into the forest and up the mountain. We’d hiked for about an hour and a half when our guide David told us to hand in our packs and walking sticks to our porters and told us to speak softly.  Then David directed me to an opening in the thick bushes and pointed towards two gorilla females lazing in the shade.  Slowly we edged a bit closer until there was maybe only a few meters between us. We also spotted the boss of the group which was a humongous ape named Maraya, he who loves the ladies. How amazing to be so close to these magnificent animals. Surprisingly enough they didn’t bat an eye at our presence. 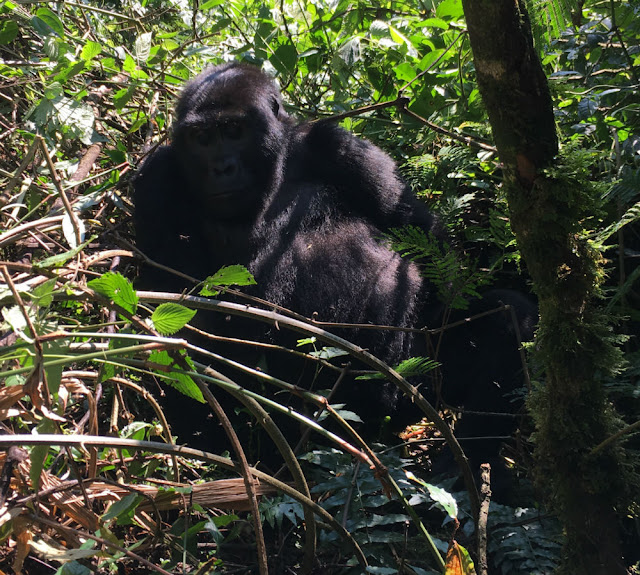 After an hour we had to leave as this is the maximum time humans can stick around the mountain gorillas. So down we went, back towards the village. 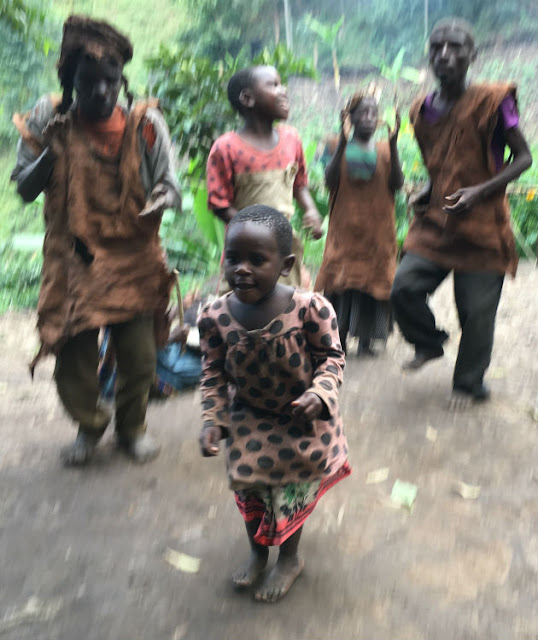 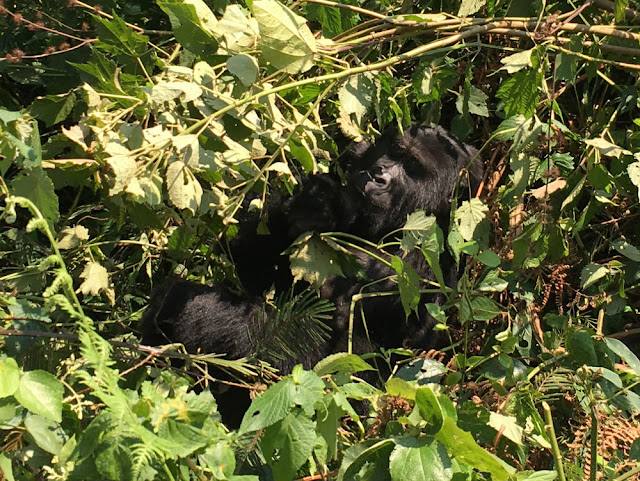 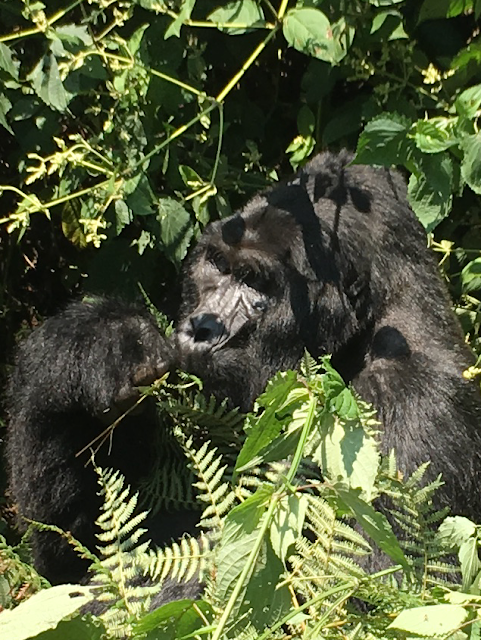